DOWNLOADS On Bicycles: A 200-Year History of Cycling in New York City

On Bicycles: A 200-Year History of Cycling in New York City. Evan Friss 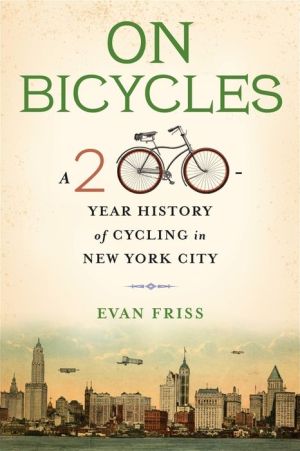 Download On Bicycles: A 200-Year History of Cycling in New York City

Subways and yellow taxis may be the icons of New York transportation, but it is the bicycle that has the longest claim to New York’s streets: two hundred years and counting. Never has it taken to the streets without controversy: 1819 was the year of the city’s first bicycle and also its first bicycle ban. Debates around the bicycle’s place in city life have been so persistent not just because of its many uses—recreation, sport, transportation, business—but because of changing conceptions of who cyclists are. In On Bicycles, Evan Friss traces the colorful and fraught history of cycling in New York City. He uncovers the bicycle’s place in the city over time, showing how it has served as a mirror of the city’s changing social, economic, infrastructural, and cultural politics since it first appeared. It has been central, as when horse-drawn carriages shared the road with bicycle lanes in the 1890s; peripheral, when Robert Moses’s car-centric vision made room for bicycles only as recreation; and aggressively marginalized, when Ed Koch’s battle against bike messengers culminated in the short-lived 1987 Midtown Bike Ban. On Bicycles illuminates how the city as we know it today—veined with over a thousand miles of bicycle lanes—reflects a fitful journey powered, and opposed, by New York City’s people and its politics.